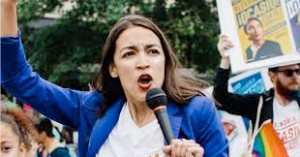 As we progressives know all too well, the neoliberal power brokers in the Democratic Party have long been dead set on preventing those of our persuasion from obtaining a decisive voice in the party. Top example: the national party establishment overrode the grassroots uprising of the Sanders campaign in 2016, contriving to prevent Bernie from getting the presidential nomination and thereby throwing the country to the wolves. Hillary Clinton won the popular vote by three million but Bernie would almost certainly have done what needed to be done to win in the Electoral College as well. Given his demonstrated grassroots support in the industrial and midwestern states that narrowly handed Trump victory, Bernie would likely have taken the White House, bigtime. And we wouldn’t now be living this nightmare the Republican cartel is inflicting on the country.

So what did Democratic Party centrists learn from the avoidable debacle of 2016? That election was theirs to lose and they blew it. Did they then recognize the error of their ways and move to open the party doors to the influx of vital energy coming from grassroots progressives? No, they did not. Instead, following the remarkable and most fortunate 2018 midterm House victories, they moved to circle the wagons to protect their hegemony against the invaders who were instrumental in bringing that victory about. Among other things, under the leadership of Cheri Bustos in 2019 the Democratic Congressional Campaign Committee (DCCC) instituted draconian new rules designed to prevent progressives like Alexandria Ocasio-Cortez (NY), Ayanna Pressley (MA), and Ro Khanna (CA) from running for office by denying anyone who challenges a Democratic incumbent the funding they need to hire consultants and vendors.
In response, Representative Ocasio-Cortez called the new rule a “blacklist” and tweeted that it was “extremely divisive & harmful to the party.” She then boldly called for individual donors to stop giving their money to the DCCC and start giving directly to the candidates of their choice.

Like AOC, Representative Pressley is a new congressperson who defeated an entrenched Democratic centrist in her state’s 2018 primary. As the first African American woman to represent Massachusetts in Congress, Pressley wrote of the DCCC blacklisting policy, “…we risk undermining an entire universe of potential candidates…–especially women and people of color–whose ideas, energy, and innovation need a place in our party.” She added, “So, let me be clear: I believe fiercely in the potential of our party, but we cannot credibly lay claim to prioritizing diversity & inclusion when institutions like the DCCC implement policies that threaten to silence new voices and historically marginalized communities.”

Having also unseated a centrist incumbent in California, Rep. Khanna observed that the new rule “is the kind of policy protecting the Washington establishment that plays directly into Trump’s hands….We cannot allow these divisive tactics when we need to be building a unified progressive movement that can bring the political revolution our country so desperately needs.”

Every two years House Democrats are supposed to supply the DCCC $250,000 to help elect Democrats to office. As we roll into the fateful year 2020, Representative Alexandria Ocasio-Cortez has refused to pay those dues on grounds that the DCCC is using their funding power to shut people like her out of the political process. In proactive response, she has founded Courage to Change, a Political Action Committee (PAC) through which she’s already raised $300,000 to fund the campaigns of worthy incumbents, half of whom are from swing districts.

Money talks. AOC’s defiance of the DCCC financial stranglehold is a bold move indeed. She is again paving the way for us progressives to claim our rightful place in the political landscape, and none too soon. 2020 will no doubt determine which way the arc of history is bending. You don’t need to be reminded how much is at stake–in a word, everything: our democracy, the viability of our planet, the life of future generations, the survival of all sentient beings.

So let a thousand Save Our World PACs bloom. And let us all remember to vote with our pocketbooks not only in the spheres of consumption and investment, but also in the sphere of politics. Until the DCCC and its neoliberal operatives stop trying to block progressives from reclaiming the Democratic Party for the people, let us follow AOC’s shining example by giving only directly to the candidates who champion our values, by banding together to create PACs like hers, and by contributing to such PACs whenever and wherever possible.

This in itself would be a significant step in the political revolution that Bernie Sanders envisions and fights for.

Until the day comes when Citizens United is an abomination of the past and campaigns are free of private financing, this is what we can do to overturn the oppressive rule of the 1%. While continuing to work for Democratic victories, for justice, and for national sanity, giving strategically is one way we progressives can begin to unrig the system that allows an unscrupulous uber-greedy few to manipulate it to their advantage while we 99% struggle ever harder to keep our heads above the rising waters.

Future Warming Predictions May Be Nearly Doubled. What Shall We Do?

Meeting on Saturday, and more

This site uses Akismet to reduce spam. Learn how your comment data is processed.